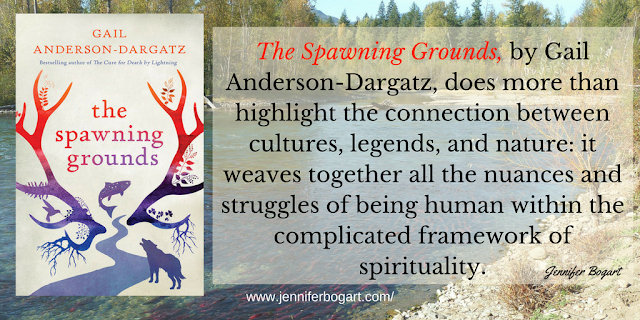 We're all connected. As biological, emotional, and spiritual organisms living on this planet, everything we do creates ripples that reach beyond our perceived borders. The Spawning Grounds, by Gail Anderson-Dargatz, does more than highlight the connection between cultures, legends, and nature: it weaves together all the nuances and struggles of being human within the complicated framework of spirituality.

Raised by their grandfather on land settled by his English ancestors, Hannah and Brandon haven't had the easiest family life. With an absent father, mental illness, and a troublesome history shadowing their childhoods, they strive to find their places in the world, even if it means forging their own paths. Unfortunately, Brandon's life is threatened after nearly drowning in the river. Physically, his body heals, but mentally, he isn't the same boy who fell into the water. Determined to save both her brother and the river, Hannah delves deeper into the past so she can change the outcome of the future.

Anderson-Dargatz delicately entwines First Nations' beliefs with white settler skepticism using her unique brand of story-telling. As the histories of the Shuswap and white settlers unfold through stories told to Hannah, more than "the mystery" of the river is unveiled. We're introduced to the possibilities of a world that can only filter into the consciousness if you're willing to suspend disbelief and simply believe.

I entered a Goodreads Giveaway and was fortunate enough to be gifted with a pre-release copy of The Spawning Grounds by Gail Anderson-Dargatz.
Posted by Jenny-B at 8:42 AM No comments: