Do not buy this book!

Do not buy Hot Dogs are Diet Food...

I've been told it's inspiring, and I've read reviews that praise the humor and coming-of-age storyline of an adult woman... but no one should consider this book a lifestyle guide.

Even though Amazon does... 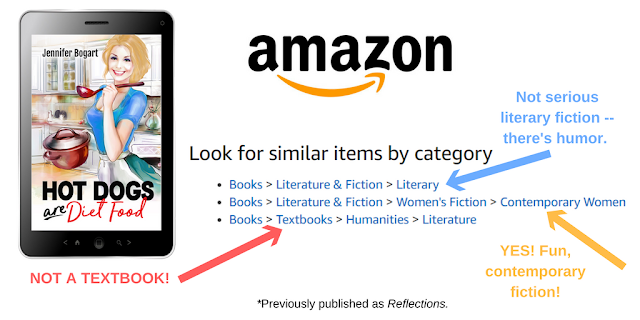 Silly Amazon. It categorized the novel as a humanities text book. Imagine that. Maybe I can get a college or university to add it to their curriculum. Maybe I should add a disclaimer so people don't try the diets found between the covers.

Roxanne isn't a real-life character, but she has real-life feelings. When I originally wrote the book, I tried the diets she did to see how the character might act or feel. Mostly, I felt hungry, tired, and irritable. I gained weight, fell in love with hot yoga, and learned to hate apples. I discovered the importance of a workout buddy and realized that "diet" is a dirty word.

So - go ahead and buy Hot Dogs are Diet Food if you're looking for an interesting read of one woman's journey to reclaim her life. But don't try the diets! As one reader said, they're liable to kill you.

*Note: Hot Dogs are Diet Food was originally published as Reflections.
Posted by Jenny-B at 8:25 AM No comments:

In January 2017, I purchased "Frog Music" by Emma Donoghue. I hadn't read anything by her, despite the popularity of "Room", and both the cover - the red paperback, not the watercolour - and the back blurb intrigued me. I love history. I love books in which the setting becomes part of the story. I love books filled with intrigue but are character driven.

Unfortunately, I did not love this book.

I tried. I really tried to love this book. I tried so hard that I took six months to read it. But... I couldn't.

The entire storyline is as flighty as Blanche, the main character, who made my skin crawl. She has no redeeming qualities. Portrayed as an aloof danseuse, who happens to be a prostitute on the side, Blanche is selfish, self-absorbed, narcissistic, and oblivious to the world around her.

Jenny, who the story is supposed to revolve around since it's her murder being investigated, is far more interesting, but her character is never fully realized. Nevermind that she is dead before the book starts; I've read stories like that and enjoyed them immensely. Jenny is little more than a ghost acting as a vehicle to expose Blanche's truth. Done properly, this could have made for a beautiful story. Instead, the book felt cluttered and unorganized. And while that might mimic Blanche's state of mind, it didn't make for a pleasant read.

Perhaps if the story had been told chronologically instead of having the timeline flip-flop back and forth, or perhaps if it hadn't focused solely on Blanche's POV, or perhaps if Donoghue hadn't tried to put so much into it without putting much at all, it would have been a better read. Regardless, I found it difficult to follow and annoying to try to piece together.

In the end, it wasn't the thriller I was anticipating. The history didn't propel the story in any way, and the characters weren't engaging enough to care about. At no point did I feel a sense of urgency or concern over Blanche's well-being. There were times I silently rooted for Blanche's would-be murderer to come forward and whack her over the head with something so we could all be down with the whole sordid ordeal.

Instead, Blanche is left alive at the end, reunited with her son, and on her merry way to who knows what. I was left with a distinct feeling of wanting... wanting to tell Jenny's story in a more coherent and honourable way... wanting a cleaner read but not necessarily a tidier ending... wanting the hours back that I had invested in reading this mess.

This was supposed to be a fictionalized account of an unsolved murder; it turned out to be a disappointing read that had the potential to be so much more. 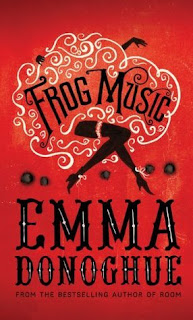