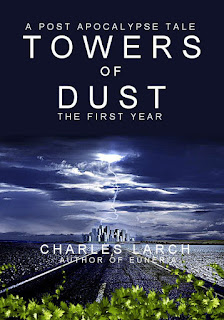 What would you do if the promised apocalypse didn’t occur and the world was left void of societal norms? Charles Larch paints a vivid picture of all that can happen when most of humanity disappears from the planet. Alien strangers predict the destruction of planet Earth, offering to remove its inhabitants to a safer environment. The few who are left behind, either by choice or accident, know that the world didn’t end, and yet they are forced to rebuild it.

The book starts slowly, introducing characters struggling to survive in a world that is being reclaimed by nature. Power plants stop working, water treatment plants are no longer tended and nuclear power sources are left to self-destruct. Yet, in a world that is disintegrating, a small number of people band together to create their own civilization. Instead of falling into chaos, each one brings his or her unique abilities and skills to help each other survive and thrive in this chaotic atmosphere.

The focus of this book is more on the crumbling world and less on character development – although we do see characters become stronger as their circumstances force them into either embrace their new world or give up on it completely. While I would have liked to see more character interaction, the book’s focus made me think about how much we rely on technology, community and having modern conveniences at our fingertips. From fires to floods and from rodents to released zoo animals, Larch showcases exactly what could happen if the world’s population suddenly disappeared leaving the infrastructure we have in place to come to its natural conclusion.

The writing is clean and compelling – it drew me forward, forcing me to read to the end. The pace is good, although there are times when the narrative jumps a bit so it felt as though I missed something, even though there were no words to miss. Overall, it’s an easy read and great for anyone who enjoys a bit of post-apocalyptic drama.

Charles Larch is the nom to plume for the author of Towersof Dust – The First Year and Euneria – The Complete Tales.