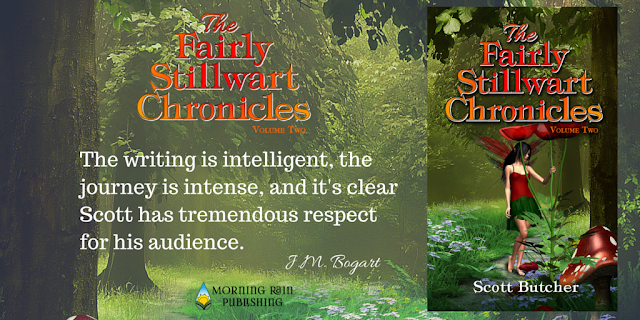 Having worked with Scott in the past, I've come to expect and appreciate a certain quirkiness to his writing. His characters are always rich in depth and emotion, making you believe you could easily run into them on the street - even if they are sprites!

One of his strengths is that he doesn't talk down to middle grade readers. The writing is intelligent, the journey is intense, and it's clear Scott has tremendous respect for his audience. Even though this series is intended for younger readers, adults will also enjoy the wry humour, adventure, and fantasy elements of the stories.

Volume Two of The Fairly Stillwart Chronicles picks up at book four, where the previous chronicles left off. The sprites are in Newfoundland, enjoying maritime traditions when the evil Tory Blithe strikes, spurring them onward in their fantastical quest. Scott introduces his readers to brownies, selkies, and banshees, revealing a mystical world readers of all ages will find intriguing.

Don't forgot to stop by Scott's blog tomorrow to find out the answer to the riddles. He'll also be announcing the winner of the Rafflecopter giveaway!

The coupon code is good for 20% off both volumes of The Fairly Stillwart Chronicles. It's valid until August 29, 2015