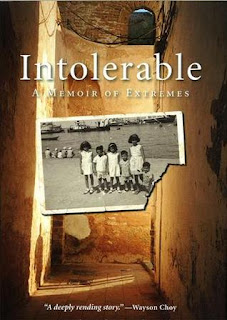 As I'm maturing, so are my tastes in literature. I still love an easy read, but sometimes sinking into something different is worth the time and effort. When I first started reading "Intolerable: A Memoir of Extremes", I thought I was about to be bogged down by politics and Middle Eastern history. To be honest, neither topic holds my attention for long - not because they aren't interesting, but because there are so many layers to peel back, that I know once I start, I won't be able to stop until I've reached the centre. Even then, I know there will be more to learn, and it's a complicated labyrinth I can't allow myself to get lost in.

I want to say I loved the book, but it read more like a journalism assignment than a memoir. Political and social history aside, there wasn't much emotion to hold onto.  In my opinion, the most intriguing aspect of the novel was tracking the slow decline of Kamal Al-Solaylee's sisters' freedoms. They went from being bikini-wearing, music-loving, Western-world-embracing, independent young women to being forbidden to show their faces in public. Repeatedly, Al-Solaylee talked about his escape plan, but he never shared it with those who also might have benefited. He purposefully distanced himself from the family who had protected him his entire life so he could build a life of his own.

This wasn't so much a book about coming out as a gay man in an intolerant society as it was a detailed history of his father's determination to keep his family safe while his children were sucked into religious extremists' directives - partly out of necessity, partly as a way to fashion their own psychological escapes. They were a wealthy, Yemeni family with resources that existed outside of the country - I can't imagine what it might have been like to be poor and without those resources.

Growing up gay in a society that punishes deviant sexual orientation must have been terrifying, but these emotions are buried under thousands of words detailing changing political and religious atmospheres. Al-Solaylee made it clear that his desire to escape was greater than his love for his family, but he told his story with such lackluster emotion, or personal insight, that I failed to connect with him and his plight.

After thinking about it, I wonder if there wasn't more his editor could have done to coax some emotion from the straightforward facts and events. Upon completing the book, I was left with the feeling that this was little more than a homework assignment. The writing was clean, the story-line concise, but his reason for telling it was lost in a sea of factual details. It made me feel as though his disconnect from his family made accessing his long suppressed emotions impossible. Perhaps it was easier to list the facts than to dive deep into his own psyche.

I enjoyed the book - I must have, or I wouldn't have read it to the end - however, I clearly need literature that makes me feel connected to the characters, even if they are strangers I'll never meet. Al-Solaylee tells his story with grace and dignity, and gave me plenty to think about with regards to the situation in the Middle East, immigration, and the unfortunate need to sometimes put oneself first in order to survive.