A cover can make or break a book, regardless of the old saying, and it really is important to invest the time and effort into getting/ creating a brilliant cover (not just a 'good' cover). Here I hope to cover (no pun intended) step by step how I made the book cover for my book, The Binding. I don’t claim to be an expert, but hopefully through sharing my methods you might pick up something useful.

This tutorial is meant for ebook covers. Paperback books for POD are slightly more tricky, and I'll cover some of the differences at the end.

I used a combination of Photoshop CS2 and Elements 9.0 (mostly due to brush compatibility issues), and my Wacom Bamboo Graphics Tablet (not required).

WARNING: This tutorial requires a very strong grasp of Adobe Photoshop. If you're unfamiliar with the software, I strongly suggest you find a professional to do the cover for you. All of the techniques I've used were gleaned from free online tutorials and personal experimentation. However I have been using Photoshop for years for my own artwork, so while these skills can be taught, don't expect to learn them overnight!

1. First off, we need ideas. What do you want the front cover to look like? A good place to start are with similar genre books already published, to get a 'flavour' of what covers are in vogue right now. Think about a cover that catches your eye- why does it interest you? Is it the image, the colours, the font? An easy way to do this is use Google images and see all the covers lined together and see which one grabs your interest. 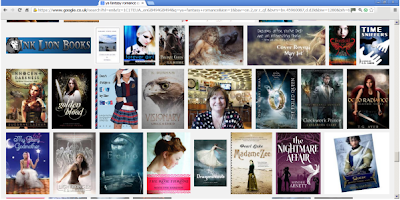 2. Right, now you've established what kind of cover you'll like, time to find some images. Deviantart and Google are good resources to use, as well as your own photographs. BUT, the most important thing- and I really cannot stress this enough- is make sure you have permission to use the stock photos you find. You'll want something that's free for commercial use, as you're using it for a book. If you're unsure, ask the photo's owner. If that's not possible, then opt for the safe side and just don't use it, no matter how 'perfect' it is. You can pay for stock image use, too. This can be the most time consuming part of cover design but it's very important.

3. Open a new file in Photoshop (I'm using Elements here). Try to set a relatively high resolution- you can shrink the finished version later to the right dimensions without sacrificing quality that way. For my book, I used 200ppi and 31cm x 45cm. 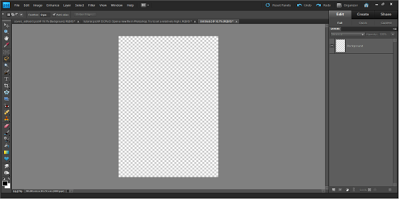 4. As Binding's opening scene begins in a dark forest, I went for this lovely picture of a night woodland (image credit: http://fc09.deviantart.net/fs44/f/2009/133/2/a/Magical_Forest_STOCK_by_wyldraven.jpg). Use the Transform option to resize accordingly. I was happy with the light and shadows, but if it's not right, use Levels (Ctrl + L) to adjust. 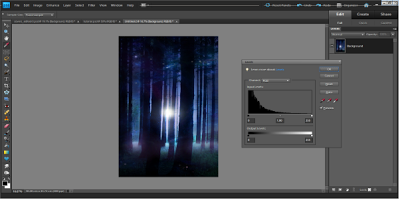 5. Next I needed a necklace. I made this myself using an emerald earring and a silver chain that I have at home. I took a photograph on a dark background, then removed the background. To do this, just use the Magic Wand tool, and set the tolerance fairly lowish, then select the areas you want to remove. Holding Shift allows you to select mutliple areas. Finally, use a hard edge brush to erase the edges and make it tidy. I then duplicated this over to the cover file as a new layer, and resized it. 6. The colour of the gem is green, and I want it red. You can select the gem using the select tool and then use Hue/ Saturation (Ctrl + U) to 'colorize' it, but it looks pretty fake that way. A better way is to open Hue/ Saturation (Ctrl + U) and tweak the individual colours (select the box that says 'Master' and alter the hues etc for each colour channel). In this case I made the green/ blue hues red and orange. This just makes it look more natural. Again, just tweak the colours around and set whatever you're happy with. I used Levels to make the chain a bit brighter, too. 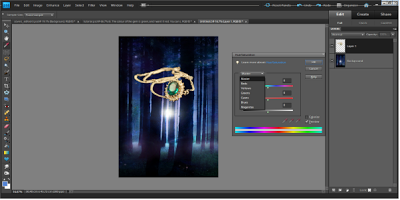 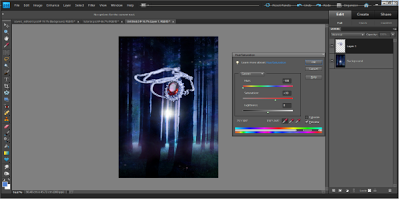 7. So I have the 'icon' image, which looks okay, but it's not very exciting, is it?  To add some flare, I downloaded a brush set for lighting effects (http://fav.me/d1ymy2t) to make a 'streak' in a white colour on a new layer above the image. On its own, it's a bit too bright, so I toned the Opacity to 60% and switched the layer mode to 'Overlay'. 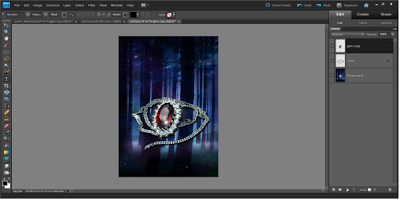 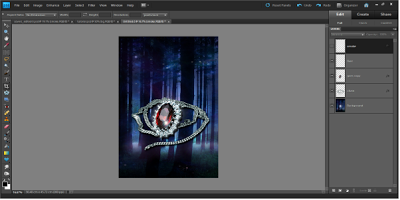 8. It's still not there, yet! The final touch for this part was to add some brush effects. Again, I downloaded a brush set from here (http://fav.me/d226rso), this one showing smoky patterns. In a pale blue colour, I made some strokes so it looks like the gemstone is smoking on a new layer above the gem layer. 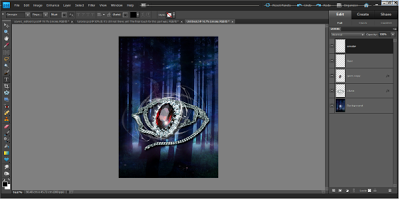 Again, it's a bit stuck-on without adding some effects, so make a Layer Style (either by right clicking on the layer in CS2 or going to Layer> Layer Style in Elements). This brings up a box like this: 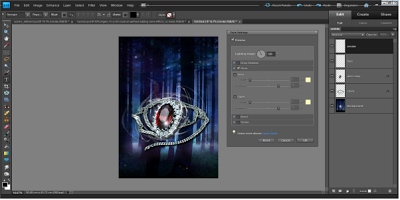 I want the smoke to glow, so I've added an Outer Glow in a slightly darker blue shade. You can play with the settings, adding a drop shadow or changing opacity of the glow, to get a wide range of effects. Don't overdo it though! 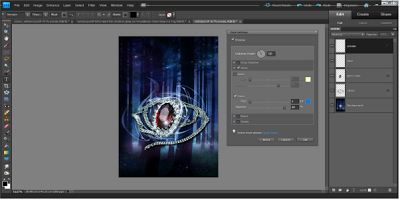 9. So, that's the necklace done, but book covers need titles! So the next step is to find a good font. Again, like with the stock images, make sure you have permission to use the font for commercial use. The font I've used is called Hawaiian Lover, and I've altered it manually (using a hard edged Eraser) to remove the bubbling. I choose a calligraphic type font as I think it fits the style of the book. Try to avoid the default fonts as they can be very plain, but at the same time don't get a gaudy one either that's hard to read. It's useful to have a friend feedback to you about the cover but constructively. I argued endlessly about font with my friend, but it was worth it as eventually I found one that both to our liking. 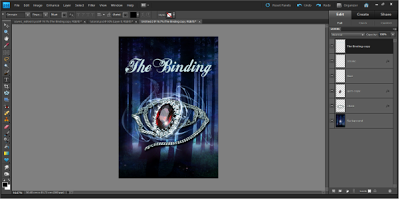 10. Plain text is kinda boring on its own, so this needs some layer effects. Open up Layer Styles again and play around. I went for a Drop Shadow and Bevel to make it look more three-dimensional. 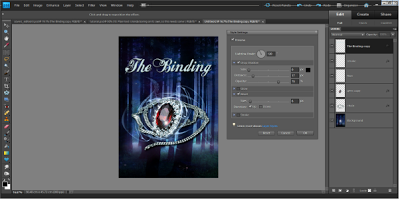 11. I did the same for the remaining text (Chronicles of Azaria, Book One, and my author name), although I used different fonts. Be careful using multiple fonts- it can make the cover look terrible! But I would say use a different font for the author name from the title. My author name is Bookman Old Style, and the series title is Fondamento. I used the same Layer Style for all of them to give it some consistency. 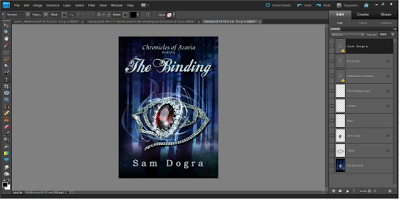 12. To make the book series title stand out, I used another brush set (http://redheadstock.deviantart.com/) and used the swirlies brush, and then used Layer Styles to add a glow effect. 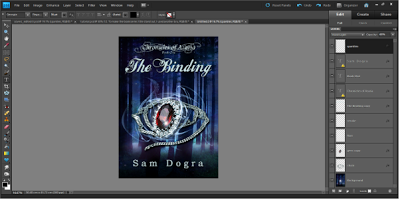 13. Almost done! Lastly, I wanted to frame the cover a bit better. Once again, your friend the brush set (link) comes in handy. I made corner edges with the brush (under Brush settings you can change the direction of the brush, or you can rotate the painted image via Transform), and applied a Drop Shadow and Bevel Layer Style. 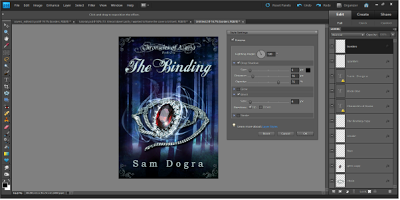 14. Save this image, then save it as another PSD file. Now it's time to resize to the right dimensions- Amazon etc will usually specify this. If you want to keep the Layers separate, use the 'Link' option so that everything can be resized without merging the layers. All you need to do now is adjust the cavas size (Image > Resize > Canvas Size), put in the dimensions, and press OK. It will tell you that the canvas dimensions don't meet the image ones, but just allow this. Now, using Transform (Ctrl + T), resize the image so it fits into the new canvas size. Once that's done, you can save this image as a JPG/ PNG, and voila! Your ebook cover is all ready to go. Do be mindful of the file size however- using Photoshop's 'Save for Web' feature can compress files more without sacrificing quality too much, so don't be afraid to use it. 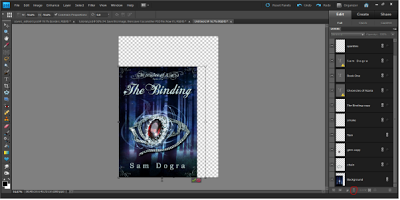 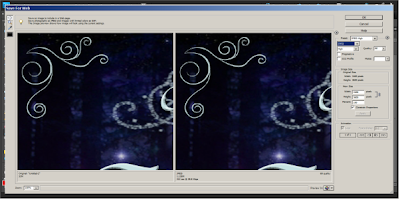 15. Paperback covers are a bit trickier to master as you'll need to make an image for the spine and back cover as well. Createspace etc have accurate templates that you can use to get the dimensions right. This will depend on things like page number, paper thickness etc, so don't attempt this stage until you have the formatting of the paperback book completed. Then all you need to do is generate a template, and open it in Photoshop. This is mine: 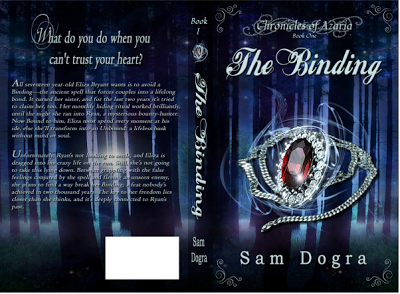 All I did was flip the forest image over, and use it for the both the spine and back cover. Using the same text and Layer Styles, I wrote out the title again for the spine, and used the same Layer Styles for the blurb as well (although I used a different font). I've also left a space for the ISBN number.

I used a similar process for books 2 and 3, but also used Layer Gradients to make sure the colours were more balanced. The icon image for book 2 is actually made from a brush set for feathers. 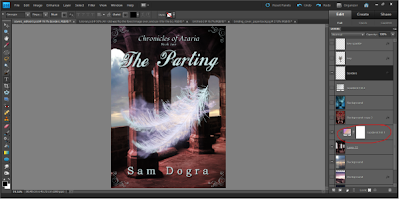 And that's it! Overall it took me around 1-2 hours to make one cover (although most of that was spent trying to get decent photos of my necklace!). The other covers were easier as all the styles were already done, so I simply had to alter the text.

It's also a good idea to acknowledge your sources, so I have an acknowledgements page in my book citing the links to the stock images and brushes I used.

All cover images are copyright Sam Dogra and may not be reproduced without permission.

Sam Dogra can be followed on her blog, Goodreads, and for a sneak peak at her current projects, Authonomy.
Posted by Jenny-B at 7:13 AM