It’s A Cover Up By J.S.Watts

It’s A Cover Up
By J.S.Watts

As an avid reader I have, from time to time, been surprised by the inaccuracy of book covers. By this I don’t mean printing errors or dodgy artwork. Far from it; these can often be quite beautifully designed covers. It’s the content or subject detail that is the surprise. Alluringly put together as these covers are, they entice you, like sirens of the book shelves, to browse, read and buy. It’s only when you have read in full the book that each cover surrounds, you realize that theirs is a hollow promise that doesn’t deliver. The image sprawled across the cover is, at best, an imaginative interpretation of the book’s actual content, at worst, a work of pure fiction in its own right. In other words, the enticing cover image bears little or no resemblance to the book it embraces.

You have to ask, hasn’t the designer read the book they are creating a cover for? In some cases the answer must surely be no.

I have also noticed, with a different type of surprise, the excitement/anxiety with which most authors react to the unveiling of their latest book’s cover. When my first two poetry books came out, I really didn’t think that much about cover veracity, or about covers much, at all. My poetry publisher favours artistically austere covers, beautiful in their tasteful, monochrome way, but hardly cause for angst or undue excitement and anyway the black and white cover images were ones I had created myself, so I was happy they were an appropriate and sympathetic reflection of the books’ contents.

With the publication of my first novel, ‘A Darker Moon’, it was a different matter altogether. My publisher in this instance, Vagabondage Press, has its own design team and all I had to do was admire their artistic efforts. I suddenly discovered that waiting for someone else to interpret your literary baby is a nerve-wracking business. Would the cover artwork be striking? Would I like it? Would it be a fair and accurate reflection of what I had written?

The day of revelation was upon me. The draft image arrived by email and I clicked on it nervously. And breathed: striking – tick, beautiful – tick, I didn’t like it - I loved it, but was it an accurate reflection of both the spirit and the detail of the novel, a dark psychological fantasy? The answer was, breath again, a resounding, oh yes! I take my hat off to Vagabondage’s Art Director – she had read and understood my novel and rendered its spirit beautifully and graphically.

I tried out the cover on friends and acquaintances. What did they think? I was delighted by their responses: “beautiful”, “striking”, “impressive” and, most important to me, “darkly foreboding”. The novel is a mythical tale of light and shadow and the unlit places where it is best not to shine even the dimmest light: I’m not after pastel pink bunnies and “lightly encouraging”.

I was also impressed by the way the cover doesn’t try to tell the complicated story of my anti-hero, Abe Finchley and his search for the woman he has been looking for all his life. Instead, it captures the spirit and atmosphere of the novel by reflecting three of the key motifs running throughout the story: the owl with its “huge yellow eyes like two full harvest moons” that haunts Abe’s lifelong nightmares; the moon itself, with its evolving phases and apocryphal darker sibling moon named after the goddess Lilith and the darkly flowing water which winds its way through both Abe’s story and London, where the book is set, like a ribbon of night.

As soon as I saw the cover for ‘A Darker Moon’ I knew it had been designed by someone who had read and understood the book, both in terms of story and tone. I cannot begin to describe what a wonderful feeling that is; that somebody ‘gets’ what you have spent ages and much sweat producing and has transformed it accurately and effectively into another art form. At last, I have understood why other authors go on at length about their book covers and their excitement at seeing them for the first time. I must also admit that I have rather fallen in love with the glowering and gorgeous owl in the centre of the cover: unlike Abe Finchley, I fortunately don’t have “a morbid fascination” with owls.

Anyway, enough words on the subject of cover design. Covers are visual things, they have to be seen to be appreciated. So here’s an image of the front cover of ‘A Darker Moon’. I hope you fall in love with it the way I have. 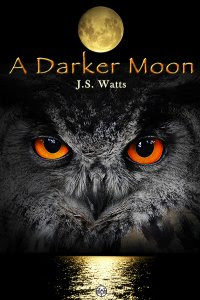 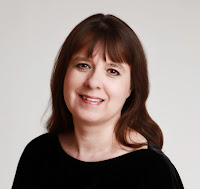 J.S.Watts is a British writer. She was born in , and now lives and writes in . In between, she read English at , and spent many years working in the education sector.

Her poetry, short stories and book reviews appear in a variety of publications in , , and the States including Acumen, Envoi, Mslexia and Solarcide and have been broadcast on BBC and independent Radio. She has been Poetry Reviews Editor for Open Wide Magazine and Poetry Editor for Ethereal