Stumbling Through The Dark by Colin Smith

Or, seven steps to getting something you’re not quite happy with.


I have little skill with graphics and the tiny skill I have has been got through a great deal of messing about and irritation. However, having spent seven years writing my novel I at least have a pretty good idea what the thing is about and what I want the cover image to do so really this is about failing and learning and getting closer each time.

I designed a cover because I needed one when I uploaded my novel onto Authonomy. Prior to that, I knew that the publisher would produce the cover and saw no reason to flail around trying to produce my own.  Of course, having made a cover, I then got the bug and kept improving it and now with self-pubbing being the way forward, it seems I’ll end up making my own cover after all.

My original cover must date to about February 2009 when I joined Authonomy, however, what with changing the design a score of times, changing the title several times, and even changing the author’s name at least three times, the ‘dates created’ on my cover images are all over the place and I’m hard-pressed to say which image came first. This is what happens when you spend 7 years writing a 400,000 word novel. It all gets a little complicated and you forget stuff. But, I think it went something like this: 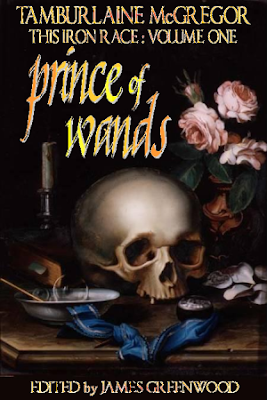 It’s horrible, isn’t it. But bear in mind this would be reduced to a tiny 80x120 pixels for Authonomy so the lack of definition isn’t an issue. The ghastly typeface and colours are issues, but never mind. Things got better. The title got better as well once I got weaned off my dodgy Tarot obsession.

Now, why the skull? Vanitas paintings (http://en.wikipedia.org/wiki/Vanitas) were very popular at one time and were intended to remind people that all the ‘vanities’ they acquired, all the wealth, power, luxuries, everything ‘of the world’ were as ephemeral as soap bubbles, roses and candlelight compared to the eternity of death. Cheerful, eh? However, it was also an implicit reminder that we will be judged not for what we have gained and achieved but for our “good works” and our obedience to God. We no longer believe in all that which is why we live in a culture obsessed with glamour, celebrity and material wealth… hey, ho, I’m an atheist, what do I know about such things?

Anyway, plenty of religion in my novel and in one of my chapters a character makes pointed reference to the vanitas hanging on his drawing room wall, while failing to appreciate either its relevance to his life or what the writer has in store for him. Further, the conflict between self-interest, duty, and moral accountability permeates the entire novel so while the vanitas only appears once in the text the themes are everywhere in the text. (I just realised I make my novel sound about as much fun as a hair-shirt and flagellation, oops) 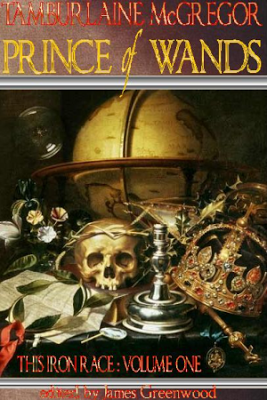 An improvement on Cover 1, with better use of colour, clearer typefaces and an image more relevant to the content of the novel. We still have a candle-holder, soap bubbles and flowers but now we have a crown, a globe, and written texts and while the skull is less dominant than in the previous cover, it now stares directly (and, I hope, accusatively)  at the viewer.

The image is a slightly cropped version of a vanitas by Hendrick Andriessen http://en.wikipedia.org/wiki/Hendrick_Andriessen and appears in most of my subsequent cover designs. Overall, though, the colours are a bit lurid, and I think I suffered a reaction to the ‘chocolate box prettiness’ because… 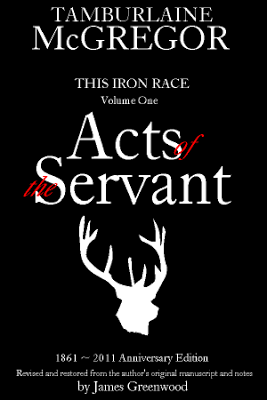 Okay, what happened here? Well, a better title for a start but also a clear nod to the cover design of Susanna Clarke’s Strange & Norrell, a novel which mine was “in the shadow of” for a long time. A white stag does appear in my novel and it’s significant to the plot (it’s the MC’s soul) but after much debate I realised it’s not central enough to justify being on the cover (unlike Clarke’s ‘raven’).  It was also too obviously a rip-off of Strange & Norrell, so it had to go.

On the other hand, I’d got the text right inasmuch as I knew what had to be in it. That Acts of the Servant was written 150 years ago and is being revised for a new edition is crucial to the narrative as the editor discovers rather more than he was expecting…. 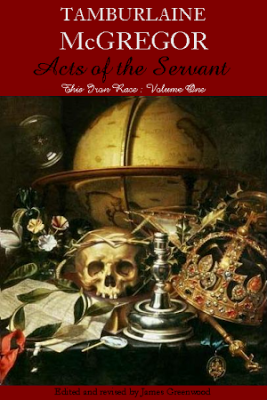 Here, I’m back with the vanitas but retained the starkness of cover 3 in the background and typography. Given the darkness of Andriessen’s painting, I felt a black background was not an option. The red is striking but muted enough not to shout.

All these covers were designed to still be recognisable when reduced to 80x120 pixels, rather than to go on a printed book or even an eBook. Hence, the image is bigger than ideal and the typography a bit too squashed. It would look better if the artwork was smaller with the background framing it on all sides. So, after a bit of experimentation to be sure that skull showed up at 120x80 pixels, that’s what I did. 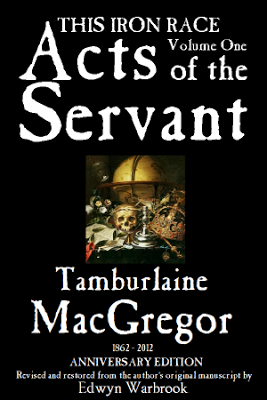 And clearly my obsession with Clarke’s Strange & Norrell hadn’t gone away. My typeface is almost identical to hers and only the fact that I have a lot more text on my cover stops it being a straight imitation.

The bright-eyed might notice that the editor’s name has changed from James Greenwood to Edwyn Warbrook. What you won’t see is that in between there was a John Ravenhead and an Edwyn Crabtree. Note: if you want a unique nom de plume for Googling it isn’t smart to use the names of large towns or cosmetic companies. Leaving aside that I’m obviously copying Strange & Norrell, this is my favourite of the covers so far. But that I am copying someone else’s idea is just wrong so it had to go. 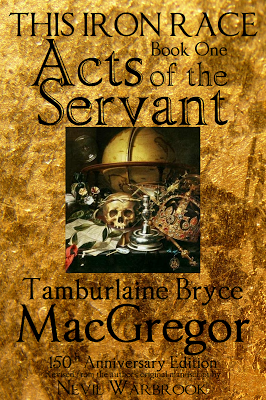 Whether this was a step sideways, forwards or backwards, I’m not sure, but it was the point I started looking at more interesting, textured backgrounds. It was also the first time I’d used Irfanview for laying out the text and I found it much better than MS Paint, which I’d used for all my covers up to now. Irfanview allows for more precise placement of text. It lacks the weight of the previous plain black background but at least I’m no longer ripping off Strange & Norrell. I do like the way the gold leaf picks up the colours in the crown, globe and skull in the painting. This was something of a celebratory cover for my fourth authonoversary, but in retrospect it was only a step toward my next cover. You might notice that I’ve now lost the dates in the text and am just calling it the 150th Anniversary edition. It cuts out a line of text and means I don’t need to redo the image every time another year rolls by without me finishing the novel. Cunning, eh? 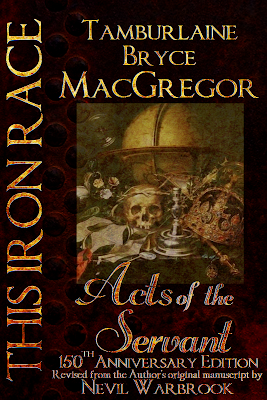 In Acts of the Servant the magnetic properties of iron are anathema to all forms of magic and the novel is largely concerned with the effects on magic of the industrial revolution. Accordingly, my blog http://bardoftweedale.wordpress.com/ has a cast iron background and it was that gave me the idea for this cover. In terms of graphics, this was something of a leap ahead. Every cover so far has been plonking an image on a plain or decorative background, whereas now the background image means something and therefore had to have work done to it. I had also (finally) discovered how to overlay images using Irfanview which meant that I could make the overlaid image translucent. Hence, my vanitas now has the rivets and texture of the background bleeding through it. The text also uses a new technique (well, new to me) as I made it transparent and overlaid it onto a background image. This was a combination of gold leaf and the original image of a piece of riveted steel. Enlarged, as here http://bardoftweedale.files.wordpress.com/2013/03/cover-42.png you can make out that the rivets show up under the lettering. The placing of the rivets also gave me the idea of arranging “This Iron Race” vertically which, if not exactly exciting, at least gets away from the lines and lines of text I had before.

So, it’s my best cover so far, but I reckon I can do better. For a start, the rivets are too small and too neat, too 20th century. I need a chunk of 19th century wrought iron with some chunky, knobbly rivets. Also, I fluffed the layout and the text below the vanitas is too squashed. Next time I’ll use a slightly smaller font for the author’s name and move everything up.

So, what have I learnt from four years of messing about?