Today was easy enough. I did some line edits, wrote some letters to book bloggers, and worked on my NaNo project. The sick boy is getting better - I'll miss the morning movie, and bowl of Hickory Sticks he discreetly places at my elbow while he munches on something yummy himself. It's a good thing he hasn't been dealing with a stomach bug.

My evening was a little bit different. I spent it at a NaNoWriMo Write In. Since I haven't been to one before, I had no idea what to expect. We were to bring little stuffed animals so people could identify us as NaNo participants. I couldn't decide which one to bring.

So I brought both... 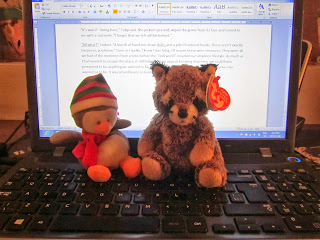 The good thing about the write in was that I wrote... I wrote an extra 1000 words. The awkward thing - well, I didn't meet any other writers. Everyone there seemed to be studying physics.